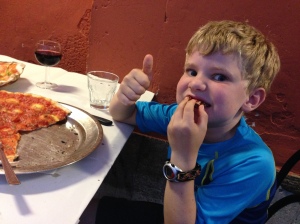 What a difference a few weeks make! When we arrived in Barcelona in the last few lazy days of August the beaches were packed well into evening and there was a constant parade of languid, tan people up and down our street. By the time we left, the beaches were emptier and there was a back to business feeling in the air. In Rome we started to feel the first cool breezes of fall and this morning here, in Florence, I wished for long sleeves. A few weeks but a world of difference in so many ways.

We loved Rome for it’s history, beautiful streets and grit. The gelato and pizza al taglio were fantastic it goes without saying. So many questions were raised: How do archaeologists sift through so many layers of rubble and bricks and make sense of it? How did the Roman Empire collapse? Did Julius Caesar really die on those steps over there in what is now a feral cat sanctuary? How do Roman women walk down those cobble streets in heels?

I think what the kids liked best were the great little cars (Smart cars and Fiats of course, but have you heard of the Twizy?) and the fountains dotted all over the city where you can rinse sticky hands, fill your water bottle or stick your finger in the faucet causing the water to shoot out a little hole in the top of the spigot like a drinking fountain. Once they discovered this trick we had to stop at EVERY fountain to test it’s pressure and range, but that was all good. Those fountains and gelato saved some days I thought the troops might rebel. For instance, the day we went to the Vatican Museum, where despite going first thing in the morning and pre-buying tickets, we spent the whole time being jostled by a constant river of tour groups. We’ve been using smarthistory.khanacademy.org as a resource to prepare us for museum visits and I’m a big fan. Our favorite modules have been about Greek and Roman art and the Renaissance. Sure, they just skim the surface of subject matter, but when the kids spotted Laocoon at the Vatican you would have thought he was a long lost friend! 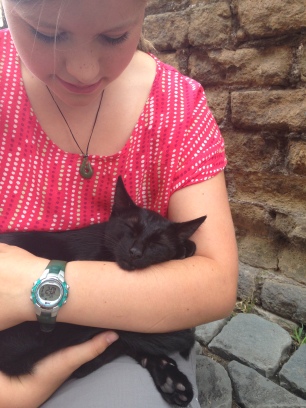 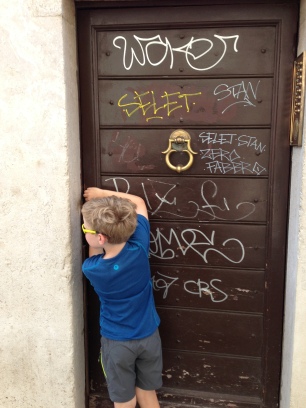 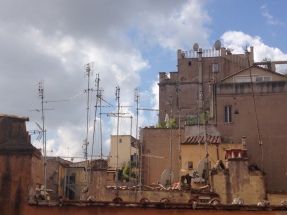 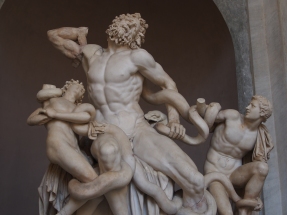 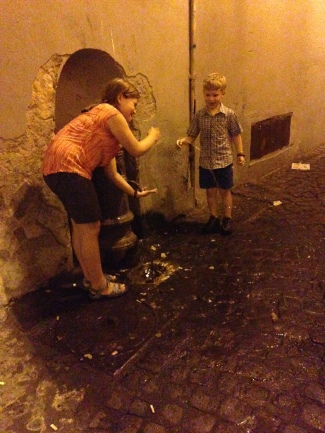 yet another water fountain

Our transfer to Florence was blessedly easy via train, and as we have been here a couple of times over the years it took no time to get settled and oriented. Della has been here before, too, though she doesn’t remember it. 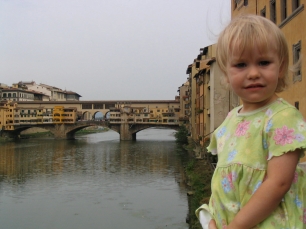 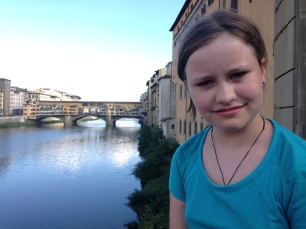 To add a little variety to our sightseeing/gelato eating/homeschooling routine, we took in a soccer game on Sunday afternoon, Genoa vs. Florence. I wore my one purple item of clothing, everyone else just avoided wearing Genoa’s colors of blue and red. Although Florence dominated the game, it ended in a scoreless tie. The Florentines were pretty clearly disgusted with their team, their shouts and gestures needed no translation, although I caught a few good swears (my favorite, “Porca puttana!” translates to “pig whore!”) We were less invested, of course, and had a fantastic time taking it all in. My other favorite bit? The scooter helmet check van in the parking lot, like a coat check but for all the helmets! 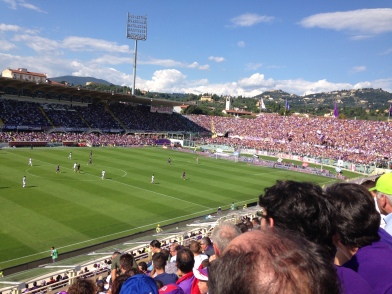 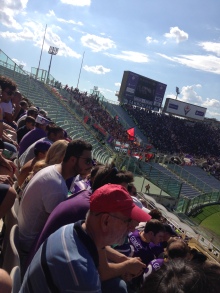 the “away” fans have their own section with plexiglass barriers

So that brings us about up to date. We have a week here to see the sights, do a crash course on the Renaissance and eat some Tuscan goodies, then on to Venice and one last week of la dolce vita before we head to parts lesser known (to us.) Ciao!