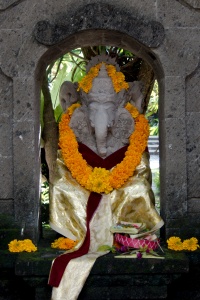 It is my strong belief that the Balinese have a festival for everything. If it isn’t a festival, then it’s a set of rituals, offering givings, dances and decorations for everything from the knives in your kitchen to getting married. Lucky for us, we got to see Galugan, a Balinese festival, in full fling along with the daily offerings that make Bali’s culture so beautiful.

But first, let me explain the offerings. There are many different types of offerings, from the small flower arrangements to the huge, fruit-laden baskets that the women carry on their heads. All of them share the same basic purpose, which is to ward off evil spirits and bless the house or temple that the blessing is placed in front of. The Balinese also put offerings on things that are important to them, such as water pipes. The most common and well-known offerings are the Canang Sari, a small box woven out of coconut palm leaves filled with flowers. Its name basically means leaf-box (canang) and essence (sari). They consist of a simple tray of palm leaves full of colorful flowers, some rice, and usually an incense stick. The flowers symbolize different gods, and the incense stick is to carry the wishes of whoever makes the offering to the gods. The “essence” of the offering is normally a coin, but sometimes I have seen a small candy used instead. It is the woman’s job to make, bless, and clean up these offerings every day. Depending on the makers of the offerings and if there are any festivals going on, the offering making can last for 15 minutes, or 45, or more. On festivals, the offering making goes into high gear, with bigger and more intricate patterns. 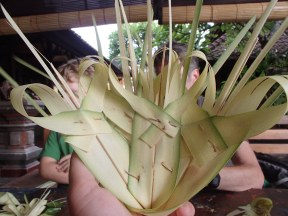 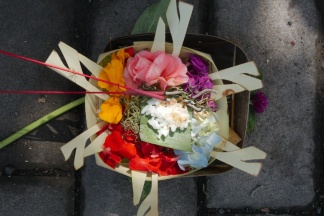 Galungan, a Balinese festival, happened while we were in Bali. It is the beginning of a time when the Balinese ancestors come down to earth. As part of the festivities, the Balinese put up huge bamboo poles, called Penjor, outside their houses and decorate them colorfully. We even saw people carrying undecorated Penjor on their motorcycles, which is like carrying your Christmas tree on your motorcycle. On Galungan day, we noticed more Canang Sari everywhere and people going to the temple in their nice clothes. In the afternoon, we saw a couple Barong parades. A Barong is a dog/lion mix costume that two people go inside. Accompanied by a parade of drummers, cymbalists, and umbrella holders, the Barong goes down village streets, receiving offerings and giving it’s blessings in return. There are actual ceremonial Barongs, and the for fun Barongs that are manned by troupes of boys in sarongs. We had one such Barong visit our hotel’s family compound, where it chased us around before maneuvering out of the courtyard. Even the day after Galungan, we had to stop for “Barong Traffic” three times! 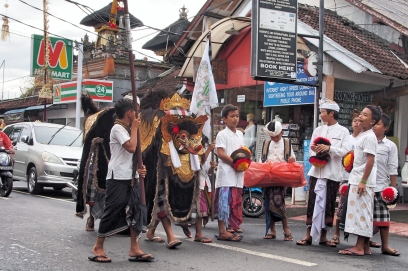 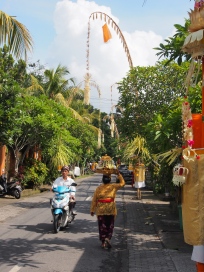 Galungan and the daily offerings are an important part of Bali’s rich, beautiful culture. They are bright and amazing and loud, and they are something you just can’t miss if you ever go to Bali.