In Mount Maunganui, I go to Mount Maunganui Primary School (MMPS). I’m here for the first term of their school year. Because the seasons are reversed here, it was late summer in February when we started, while it was mid-winter at home. I am in year four, what my friends back home would call “third grade.”  My teacher is Mr. Nesham, who used to live in Africa but moved to New Zealand. Mr. Nesham likes to tease and joke about things. He’s a good teacher.

I get to school by walking only a few minutes through our neighborhood. Usually I walk myself to school, which is different than what we used to do in Seattle. Mt Maunganui is a much smaller town than Seattle, and there isn’t as much traffic.

A typical day is very crazy. My class is much larger than I am used to (especially after the past few months going to “school” with mom and dad as my teachers) and it is a little chaotic. My classes include maths, reading, language, topic, Maori, and comprehension. “Topic” is kind of the big theme that we’re working on, like the Treaty of Waitangi, or when we were getting ready for our estuary field trip. As play time we have morning tea (snack break), swimming, and lunch. On Friday we do a sport at the end of the day. There is a swimming pool at school that we go to almost every day. The water is very cold, but if we hesitate about going in, Mr Nesham will throw us in anyway!

One of the big events in term one was the “tryathalon” where I had to swim two lengths of the pool, bike one lap around the field and then run around the block! I was really tired at the end of that day. Another event was a field trip to the Estuary, where we got really muddy.

Some things that are the same as school in the United States. The classroom looks like an ordinary classroom (besides the Treaty of Waitangi and New Zealand history posters on the wall.) The schedule is pretty similar, too. My friends and I like to play games at recess. My friends like many of the same things as me like Legos and video games and fart jokes.

Me and my friends

At the finish of our triathlon

Biking in the triathlon

Some things that are different; I have to wear a sunhat every day or else I can’t leave the shady area at recess. Also, the games we play at recess are different, like non-stop cricket. Everyone speaks English with an accent and has different words for things, “maths” for “math,” “togs” for “bathing suit,” “heaps” for “lots,” and “water bottles” are “drink bottles.”

Some of the things I would not have learned about if I had not gone to school in New Zealand:  I learned about the Treaty of Waitangi, which was between the Maori (native people) and the Queen of England (Queen Victoria.) It is an important founding document to Kiwis like the Declaration of Independence is to us. Instead of Independence Day on the 4th of July, Kiwis celebrate Waitangi Day on February 6th. Kiwis also celebrate ANZAC Day (Australia and New Zealand Army Corps) on the 25th of April, which commemorates when Australia and New Zealand troops participated in a battle in World War I in Gallipoli, Turkey where many soldiers died.  New Zealanders are called Kiwis, by the way, after the native flightless bird that is a national symbol. There is a fruit called kiwi, too, but that name came later when people weren’t having a lot of luck trying to sell a fruit called “Chinese gooseberry” and wanted a catchier name. I did a report on another native flightless bird called the pukeko, and you may wonder, why does New Zealand have so many native flightless birds? It’s because New Zealand is different from other places in the world (or it was).  Because there were no mammals (except for a few bats) to be predators, the birds lost their ability to fly over time. Europeans introduced possums and stoats and it has been harder for flightless birds ever since.

I drew a pukeko… 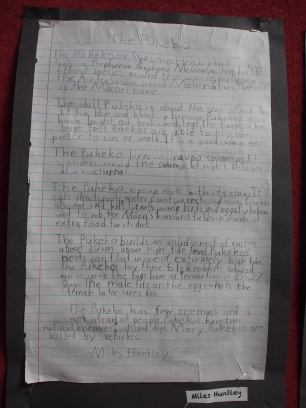 I’ve really had a good time here in New Zealand and I’m going to miss my new friends!