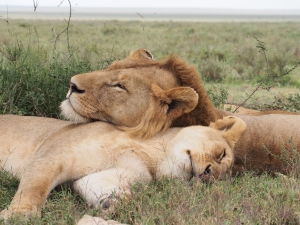 I had been humming that old Toto song (I bless the rains down in Af-ri-caaaa) for weeks as our theme song, until I got here and realized to my disappointment that Mt Kilimanjaro does not only not “rise like Olympus above the Serengeti” it isn’t even remotely visible. All that awkward phrasing for nothing kind of killed the song for me, but that is the only disappointment I’ve suffered. I don’t like to play favorites, I mean, we’ve had some pretty great weeks on this trip. Diving on the Great Barrier Reef? Hiking the Routeburn in New Zealand? Eating all that pizza, pasta and gelato in Rome? Good times! This past week though, has just been spectacular.

There’s some calculus that goes into deciding when to come to this corner of the world. You can come in February when the wildebeests drop their babies en masse. You can come in July and August when the temperatures are low, the prices are high, and the parks are more crowded with jeeps jockeying around any leopard sheltering tree. You can come in December and January when it’s hot and dry and game is easier to see at the water sources. As it worked out, we’re here at the tail end of the long rains, which is low season and a little quiet. The grasses are too long for easily spotting some animals, notably cheetahs and the little antelope called dikdiks, but though I was prepared to sit and watch zebras and wildebeest through drizzle, that hasn’t been an issue. Except for one overcast day that made for lousy photos, and one afternoon shower that turned the roads temporarily to slippery muck, we’ve enjoyed some lovely days and perfect temperatures, which in combination with low season rates works out just peachy.

We’ve steered our own ship for nine months now, but for this leg I had help in planning from a US based company called Access2Tanzania, and what a treat it has been. Having an indefatigable driver and guide, Mussa, and ten day hiatus from the endless logistics of independent travel has been like a vacation (from my vacation?) No negotiating taxi fares or finding restaurants, we’ve been floating in a bubble of game drives and lodges that feed us too much. At the same time, long, dusty days rattling in the back of a safari jeep are surprisingly tiring (and might I add, hard on the bladder!) Most nights we could barely make it through the soup course without wishing for our beds.

We started from Arusha and had one day in Tarangire National Park, an Eden-like landscape studded with magic baobabs and acacias, home to more than 400 species of birds and all the crowd pleasing animals. Here we started off with a bang by seeing a pair of cheetahs perched atop a termite mound in the first fifteen minutes. Della’s list says it all.

baobab and acacia with weaver nests 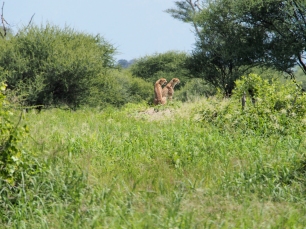 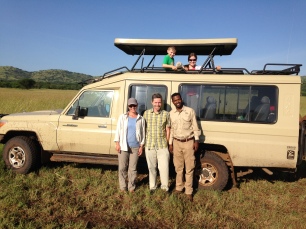 We had another day in Lake Manyara National Park, also quite nice although the vegetation was too thick to have a hope of spotting the tree climbing lions for which the park is famous. We were plenty happy to watch big troops of baboons, giraffes and elephants though. 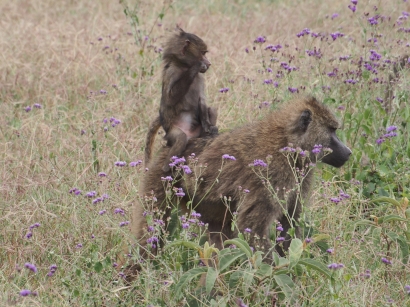 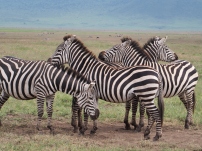 We had two decadent days in Ngorogoro Conservation Area, where the caldera walls hem in an astonishing density of wildlife. The herbivores are well respresented by wildebeest, zebras, impalas, enormous, lone bull elephants, eland, hartebeest and rhinoceros. Lions, hyenas and jackals provide drama. Ostrich, warthogs and hippopotamus serve as comic relief. Mussa had us up early one morning and bombing down to the crater floor while it was still dark. We were rewarded by the sight of a pride of 16 lionesses and cubs walking in a group and crossing the road right behind our jeep, trailed hopefully by two black-backed jackals. Mussa was not done with us that day- having determined that Ngorogoro Crater was our best chance to see rhinoceros, he went searching for and found 9 individuals including a mother and baby, quite a feat given that the crater’s population is only about 25 individuals.

looking out over Ngorogoro Crater 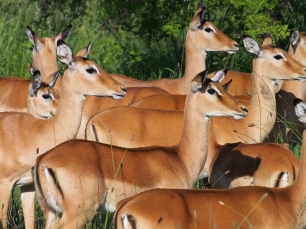 The next day we transitioned to the Serengeti, with a brief educational stop at Oldupai Gorge (not Olduvai, as I always thought, thanks to a very old spelling mistake.) The Central Serengeti was lion central, and we saw 36 of them that day, including four lazing in the middle of the road and a whole family of ten perched crazily in one tree, whether to escape the flies or spot prey we weren’t sure. We missed seeing a mother lioness bringing down a lost young wildebeest, but made it in time to see her biggish cubs having at it, yanking off the back leg as handily as I would twist the drumstick off a chicken, their muzzles staining red. It was a banner day for carnivores, as we also saw a mother leopard resting in a tree while her two cubs tore into the antelope she had dragged up and parked on a sturdy branch. 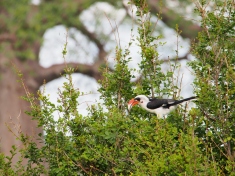 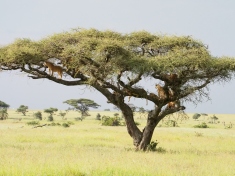 ten lions in an acacia tree

It was a privilege to see big groups of elephants in all the parks, but it made my heart especially glad to see them on the plains of the Serengeti, working their way through the grasses like tractors. One group more than 40 strong had at least ten youngsters in the mix; Mussa thought it must respresent two breeding groups that had come together to drink water and socialize before splitting apart again. Another evening, trying to get back to our lodge before dark, we came across a group in the road with the littlest baby with oversize Dumbo ears. When the mother felt that we were getting too close she turned, ears wide and trumpeted her irritation. We were apologetic. 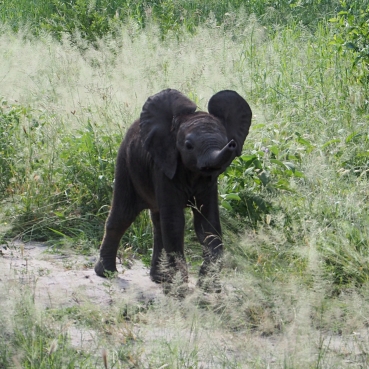 We proceeded to the western corridor in hopes of catching up with the wildebeest migration, hoping maybe we would time it right to see some crossing the crocodile filled Grumeti River? Here the wildebeest didn’t oblige and we had to detour north in order to see part of the migrating herd, thousands and thousands strong. Believing we really should see cheetah again Mussa was aggrieved not to spot any* but in our search we saw another pride of lions with four little cubs, so close we could hear them mewing to each other and so stinking cute Della and I got teary. We also saw some hungry looking crocodiles, and a massive pool of hippos too numerous to count, snorting and gurgling like a bunch of whoopie cushions. At night from our lovely tented camp, we heard hyenas in the distance and a leopard’s grumbly growl in a nearby tree.

vultures picking over a wildebeest carcas

Many of these animals we’ve seen in zoos around the world- in Singapore, Sydney, and La Palmyre in France, not to mention our own Woodland Park Zoo in Seattle- but there was something different about seeing them out roaming around, interacting- impalas lunching near baboons, zebras mixed with wildebeest, a jackal irritating a lion. It goes with out saying it was a wonderful experience to share with our kids. If you’ve ever thought of coming here and are daunted by the prospect of Africa, as I was, don’t be. Let someone help you with the logistics, pack your binoculars, and come. I’m already plotting my return trip. I’d be devastated if I didn’t know we have more game watching riches ahead of us in the next six weeks. As we slide through the home stretch, it appears we’ve saved the best for last.

*it was fitting that we saw cheetahs, two of them, on our way to the airstrip, practically the very last animals we saw our very last morning.